Should I get a divorce?

Divorce is rampant nowadays and thus you might also be thinking, 'Should I get a divorce?' 'Is divorce the key to gaining back my peace of mind?' The truth is, when a husband and wife fight with each other even for one hour, they start thinking about getting a divorce. Over time as they have more conflicts this thought about having a divorce intensifies in nature, thus causing this seed to grow into a big tree. 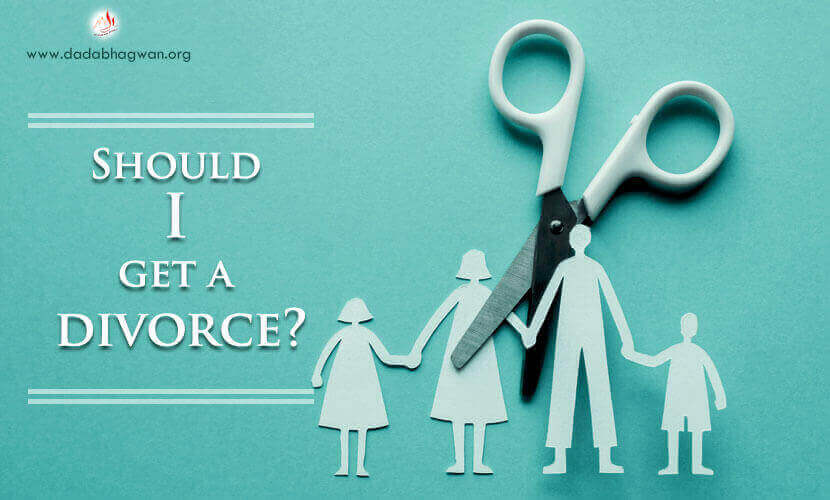 If your spouse keeps tearing away at the relationship, it is your responsibility to keep mending it. Only then will your marriage last, otherwise it will break. Param Pujya Dadashri explains more below:

Questioner: Are the divorces that take place in the west, when couples do not get along, considered bad?

Dadashri: What is the meaning of a divorce anyway? Are these people cups and saucers? When you cannot separate even a cup and saucer, how can you separate a man and a woman? Once, there used to be a vow of one wife and one husband. The kind of thinking, which prevailed, was that other than his own wife, a man would not even look at another woman. Where then do thoughts of divorce have any dignity in such a place? Do you like divorces?

Learn from the Experience of Others

If we want to learn how to make a marriage last, the best way is to listen to the experiences of those who have been married for a long time. Below is one such experience of a lady, who was married for eighty years. How did her marriage last this long, let us find out…

“These are our moral values. Couples go on quarreling and yet they stay together for eighty years. Even during the funeral rites on the thirteenth day, the widow would prepare everything that her late husband liked. She would even order food all the way from Bombay for the ceremony. A young boy would say to the old widow, "Maji, (title used to address elderly ladies), six months ago he pushed you and at that time you were calling him all kinds of names!" She would reply, "Even then, I would not find another husband like him." That is what the old widow would say. From the experiences of her entire life, she will discover that at heart, he was a nice man. His traits were awkward, but at heart he was good.

Our lives should be lived in such a way that people would take note of us. We are such that, we abide by and endure the woman in our life, and the women are such, that women do the same. In this manner, eighty years together will pass.”

Param Pujya Dadashri has declared, “If a couple is on the verge of getting divorced, I will reunite them in one hour if you bring them to me. I will mend them in one hour, so they remain together again. All these problems are merely fears due to a lack of understanding. Many couples that were separated have now been happily reunited.” This statement stands true even today because many married couples are living happily after meeting Pujya Deepakbhai even you can too.


If you are on the verge of divorce, and want to know how to save marriage you can ask for forgiveness with this special prayer called Pratikraman, it will help heal your relationship.