Often in our day-to-day life, we attend workshops and seminars to help us learn how to interact with others in the professional world and how to develop our interpersonal skills. However, we do not try to use these skills to help us deal with our spouse.

Param Pujya Dada Bhagwan says, “One is not to win the world, he has to win the home (family).” 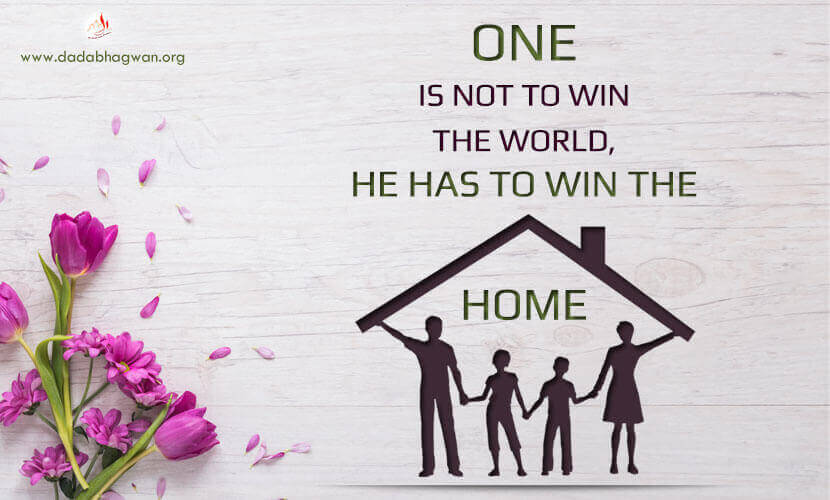 Let us learn how to handle a wife and how to handle a husband through the experiences shared below. Some excerpts of actual spiritual discourses with Param Pujya Dada Bhagwan have been added below as they are.

When you study your spouse’s personality, you are able to recognize their likes and dislikes, which enables you to act accordingly to avoid conflict. For example, when we admire roses, we make sure that their thorns do not hurt us. In the same way, if your spouse has a habit of waking up early and you like to wake up late, if you learn to adjust with them then you will able to avoid problems.

If a husband and wife both make a firm commitment to adjust with each other, they will find a solution. If one is insistent, the other has to adjust by giving in. If you do not adjust you can become insane. It is because you have harassed others that you have to endure so much anxiety. If you provoke a dog once, twice, or even thrice, he will still heed you. But if you keep annoying him, he will bite you. Even the dog will think of you as a bad person. This is worth understanding. Do not provoke anyone. Adjust everywhere.

3.Finding middle ground in your interests

It is natural to have differing interests even as a married couple, so how do you go about enjoying what you like and at the same time do what your spouse likes also? Without changing each other’s interests, you just need to apply this small key, which is to compromise. If you like going out and your spouse likes to spend time at home, then you can plan something so that both of you are able to enjoy yourselves. Stay in some nights and go out on others. That way both of you will be able to enjoy each other’s company and interests without letting it take a toll on your relationship. The secret behind how to make a marriage work lies in love and acceptance of each other and in the circumstances as they unfold.

When talking to your spouse what you say matters just as much as your tone. You should speak in such a way that you do not provoke them. Here is a small extract, where a lady is sharing here experience with Param Pujya Dadashri.

“One lady told me she felt as if I was her father from her past life. She was very nice and very cultured. I asked her how she got along with her husband. She told me that he does not say anything. He is always calm and composed. I asked her surely some days they must have some disagreements. She said no but sometimes he would make a cynical comment. I understood. So I asked her what she would do when he made sarcastic comments, I asked if she would strike back at him. She replied, “No, I tell him that we are together due to the unfolding of our karmas. I am separate and you are separate. So why are you doing this? Why do have to make sarcastic comments and what is all this about? No one is at fault here. It is the fault of the unfolding of the karmas. So instead of making sarcastic comments, why don’t you settle your karmas with equanimity? Why should we clash?” I have seen many women, but this is the only woman I have seen with such an elevated understanding.”

5.Cool the fire of conflict

Param Pujya Dadashri says, “First of all, conflicts should not arise in the home, and if they do arise, then try to diffuse them. If you feel that an argument is about to ignite, then cool it down by sprinkling some water. What is the benefit of living a life filled with conflicts like before? What is the point of that? Life should not be filled with conflicts, should it? What are you going to divide and take along with you [to the next life]? When you have to live together under one roof, what is the point of bickering? If someone says something negative about her husband, the wife becomes upset that, ‘This person is slandering my husband.’ But then, she herself accuses her husband that, “You are like this and you are like that.” All this should not be so. The husband should also not do that. If there are conflicts between you two, it will affect your children's lives. It has all kinds of effects on these delicate children. Therefore, conflicts should go. Even the children in the home will grow up well, if conflicts leave. Actually, all these kids have been spoiled!”

6.Do not get affected by the misuse of power

Questioner: In America, as women also go to work, they tend to gain a bit more power. Due to this, there are more disputes amongst husband and wife.

Questioner: But if she uses her power incorrectly then it would not run smoothly, would it? If they use the power well then it would be good.

Dadashri: It’s like this, if there is no one to believe in that power, then her power will collide with the ‘wall’. She may exercise her power arrogantly here or there, but if you do not let it affect you [show any reaction] at that time, then her entire power will strike a ‘wall’ and then hit her on the rebound.

Questioner: Do you mean to say that we should not listen to our wives? Is that so?

Questioner: That is correct. Similarly, what if men are misusing their power?

Dadashri: At that time, you have to exercise caution. ‘Hmm… he is out of control today.’ Say that in your mind, do not say anything out loud.

Questioner: Yes, otherwise he will become even more out of control.

Dadashri: They say, “He was out of control today.” It should not be so. It should be wonderful… Would two friends behave like this? Would their friendship last, if they behaved in this way?  Therefore, these two are indeed considered friends; husband and wife means that they are to run their household as friends. Instead, look what a state they have turned it into! Is that why people get their daughters married? To green card holders! Is it for this? Would that suit us? What do you think? It does not suit us! Who is considered as one with good moral values? Is it the one who has conflicts at home, or is it the one who does not have any conflicts?

Questioner: What should one do so that conflict does not occur? What is the solution for that?

Dadashri: Tell me what causes the conflict and I will immediately show you the medicine for that cause.

Questioner: They happen in matters related to money, the children, they happen for everything. They tend to happen even for small matters.

Dadashri: What happens in matters related to money?

Questioner: We are unable to save anything, all of it gets spent.

Dadashri: How is your husband at fault in that?

Questioner: No fault at all. Sometimes an argument starts due to this.

Your money will not increase by arguing. If your merit karma (punya) is in fruition then it will not take time for money to flow in. So tell me all the things due to which conflicts happen, like the matters related to money. Even if a lot more money is being spent, you should not nag about that. This is because ultimately, whatever was spent, has gone. However, say you have a conflict over spending $50 more, then you will end up having a conflict costing $100 instead. Therefore, you should never have any conflicts.

In 1943, Hiraba lost one of her eyes. She had glaucoma and an attempt to operate on that eye not only failed, but also damaged the eye even more and she lost it altogether.

So people around me started to think of me as a prospective new husband and some had plans to get me married again. Back then there were a lot of brides-to-be available. Parents were only interested in getting their daughters married, even if it meant marrying them to their doom. There was a man from the village of Bhadaran, who came to me with a proposal for his brother-in-law’s daughter. I was thirty-six at the time in 1944. He cited various reasons. The first was the loss of Hiraba’s eye. The second was the lack of any children to carry on the Patel name. He suggested that I remarry. I told him it was true I had no children, but neither did I have anything to pass on. I refused. I told him that I had made a promise to Hiraba to take care of her when I married her. What can anyone do if she has lost one of her eye? Besides even if she were to lose the other eye, I would take care of her. I would hold her hand and guide her around. He tried to entice me with a dowry and I asked him, ‘Do you want to throw your daughter in a well? Besides, Hiraba would become very unhappy. She would feel that I remarried because of her eyes. She would feel terrible about her eyes. Would she not?’ I had made a promise to pay, to take care of her. I told him, ‘I am not a person who would ever go back on his word. No matter what happens in the world, a promise is a promise. I have given a promise and once a promise is given, there is no going back on it. So what if it takes this entire life to fulfill that promise to her, there are many more lives to come. I had given her my hand in marriage and when I gave that hand to her, I had given her a promise. I gave her my hand in everyone’s presence, and I gave her a promise as a Kshatriya and I will have to devote one lifetime to fulfill that promise. 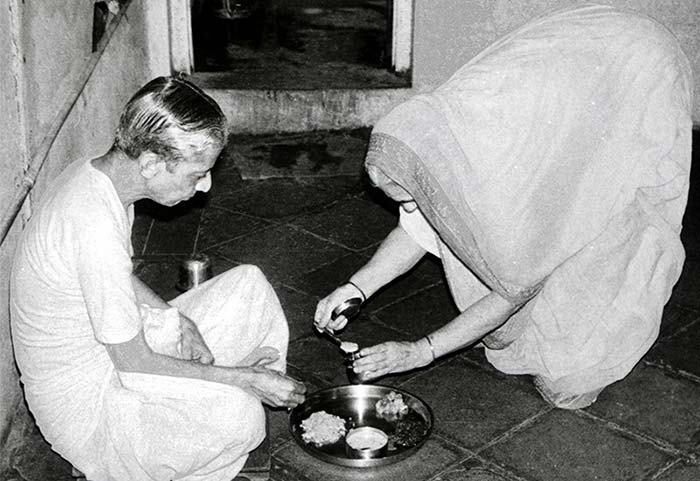 
Param Pujya Dadashri extracted this principle from His own relationship with Hiraba, He said, “Differences would naturally occur because I would say something to her for her own good but even then, she would not appreciate it, so what other solution is there? In this world, it is not worth looking at good or bad, right or wrong. Whatever works is good and what doesn’t is bad. The key thing is to live life without conflict.”