Is it better to remain silent for conflict prevention?

There are times in life when conflicts arise and we do not know how to deal with the situation at hand. In that moment, the first thing that usually comes to mind is to remain silent rather than say something that may make matters worse. But is this the correct solution for conflict prevention? Let us find out what Param Pujya Dada Bhagwan has to say on the matter: 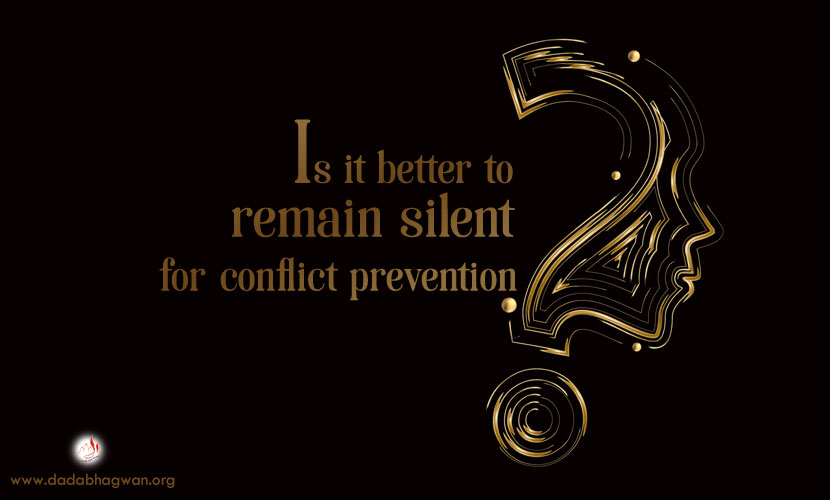 Questioner: Is it possible to dissipate a conflict by remaining silent and avoiding that person?

Dadashri: No it is not possible. You should speak with them if you encounter them. You should ask how they are doing. If they react with hostility, you should quietly try to resolve the situation with equanimity. Sooner, or later you will have to resolve the situation. Just because you do not speak with them, does not mean the problem has been resolved. It is because the problem has not been resolved that people end up not speaking with each other. Not speaking with the other person means there is a burden; the burden of the unresolved conflict. You should approach the other person and say, ‘Tell me if I have done something wrong. I make many mistakes. You are a very intelligent person, you are learned and you do not make many mistakes but I am not as learned and so I make a lot of mistakes.’ If you say this to other person, he will be appeased.

Questioner: What if he does not calm down even after I say this?

Dadashri: What can you do if he does not calm down? Once you say this to him, you are free. What else can you do? He will eventually calm down. You cannot pacify a person by reproaching him. He may appear to be pacified but he will make a mental note of it from within and will throw it back in your face when you least expect it. So, understand that this world is full of vengeance. The fact is people will continue to harbor vengeance; they will harbor parmanus (atoms) of revenge within so you must try to resolve the situation completely.

Questioner: What should I do when I try to break the silence, by asking for forgiveness from the other person but he reacts even more negatively?

Dadashri: Then you should stop saying anything to him. When you realize that he is stubborn by nature, you should stop. If he has the misconception of, ‘The one who gives in is the weak one’ then you should stay away from him. Then, whatever happens is correct. But resolve everything with those who are straightforward and easy to deal with. Can you not tell who in your household is easy to get along with and who is difficult?

Questioner: If the other person is not straightforward, should we sever the relationship with him?

Dadashri: Do not sever it. Worldly interactions are not such that they break through you breaking them. You should just remain silent and then one day he or she will get angry and bring about a resolution. If you remain quiet, then one day she will get angry and ask you, ‘You do not say anything anymore. You have not said anything for so many days,’ when she gets angry, you will resolve things.

Is silence an admission of Guilt?

You might think, ‘If I remain silent, the other person may mistake my silence as admission of my guilt and in turn fight even harder with me.’ However, this is only your belief. If a man gets up to go to the bathroom in the night and bumps into the wall, does that mean that the wall bumped into him because he remained silent?

If this wall has the power to do anything, then so does this body. Do we have the authority or the power to fight with this wall? In the same way, what is the point of getting angry and fighting with people? The other person definitely does not have the independent control or power, so why don’t you also become like the wall? When you scold your wife, the God within her is making note of what you are doing. If she starts to scold you, you should become like the wall, and the God within you will help you.

On your part, when you decide and maintain a strong resolve that you do not want to get involved in any friction with others, it is the beginning of your right belief; going ahead this firm resolution of yours will help you bring an end all the conflicts in your life. It will result in a spontaneous, inner, intuitive approach within you, which will guarantee your liberation from all conflicts.