Why should one donate to the temple?

Questioner: We had visited a temple where millions of rupees were spent on a stone idol of God. The Lord has said that the pure Soul resides within all living beings. But here people abuse and hurt living beings, within whom God resides and yet they go around spending millions of rupees for a stone they carve into an image of God. Why is that so? 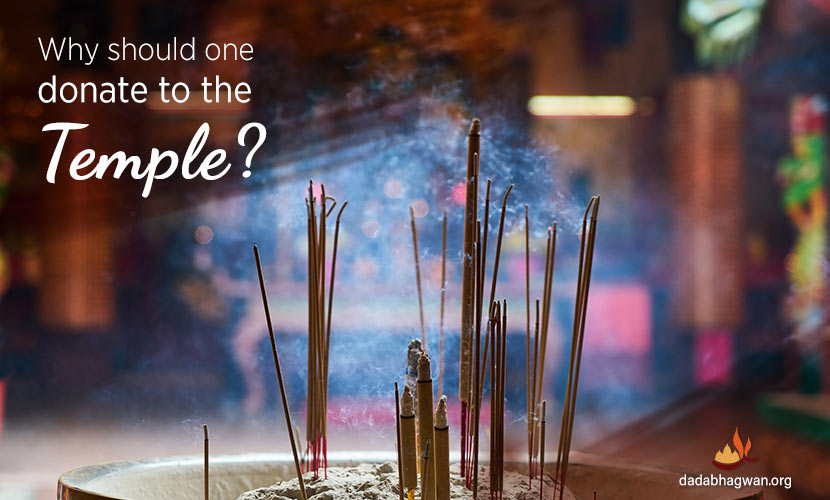 Dadashri: Yes they hurt and abuse each other, but they do so out of ignorance! They do so because of their inherent weaknesses of anger, pride, deceit, and greed. People go out to earn more money even when their household is running comfortably. Is it not clear that they are trying to acquire more than their allocated quota? Everyone in the world is allocated the same quota but those with greed take more than their share, depriving others of their share. Nevertheless what they do acquire is not by stroke of luck, they acquire it because of their merit karma. You acquire wealth because of your merit karmas but you should also spend it. It will begin to accumulate and it will only be deducted if you spend it. It accumulates because of your merit karma but should you not also know how to deduct it?

So even by building temples, people are doing the right thing. They are looking for a key to their dilemma. They want to have a place where they can pray or do darshan without any inhibitions. They are embarrassed to do so in front of the living Gods, but here in front of God's idol, they will even dance. They will jump and dance around because they are alone, and no one is there to point out their obvious errors! However they cannot do so in the presence of a living God. If they were to do all this in front of a living God, they would acquire salvation without doubt. They would be liberated. But they lack this inner energy. They do not have such merit karma.