Shreyansnath Bhagwan Stories: Exploring the Past and Last Births

Tirthankara Shreyansnath Bhagwan is the 11th Tirthankara. His symbol is rhinoceros. His height was 80 measures of bow. He had 76 Ganadharas (chief disciples of the Tirthankara). Ishwar Yaksha and Manvi Devi are His Shasan Yaksh Dev and Shasan Yakshini Devi.

Let’s now go through the life stories of the Lord’s past two births, prior to His birth as Tirthankara. Finally, we will go through the Shreyansnath Bhagwan story.

In His third-last birth, Lord Shreyansnath was King Nalinigulm of Kshema town in Kachh Vijay, located in the Purva Videh Kshetra on the Pushkarvar Dweep. King Nalinigulm ruled his kingdom very nicely, serving his people well and following religion scrupulously.

Later, after many years, he took Diksha, and because of his great devotion and worship, he acquired the Tirthankara-naam-gotra-karma. On completing his age, he reincarnated as a celestial being in the seventh dimension of heavens.

Upon completing the celestial lifespan, the Soul of Shreyansnath Bhagwan descended into the womb of Queen Vishnu Devi, the wife of King Vishnuraj who lived in the Sinhpur town of the Bharat Kshetra.

During this time, the kingdom witnessed good credit (shrey in Hindi and Gujarati) and fortune. Hence, upon birth, the son was named ‘Shreyansh’. The celestial beings celebrated His birth on the Meru mountain. His complexion was gold. Meeting with Tripusht Vasudev

When He grew young, Shreyansnath got married and ascended the throne. After ruling the kingdom for many years, He then took Diksha and attained Manahparyav Gnan. Within just two months after Diksha, He attained Keval-Gnan. 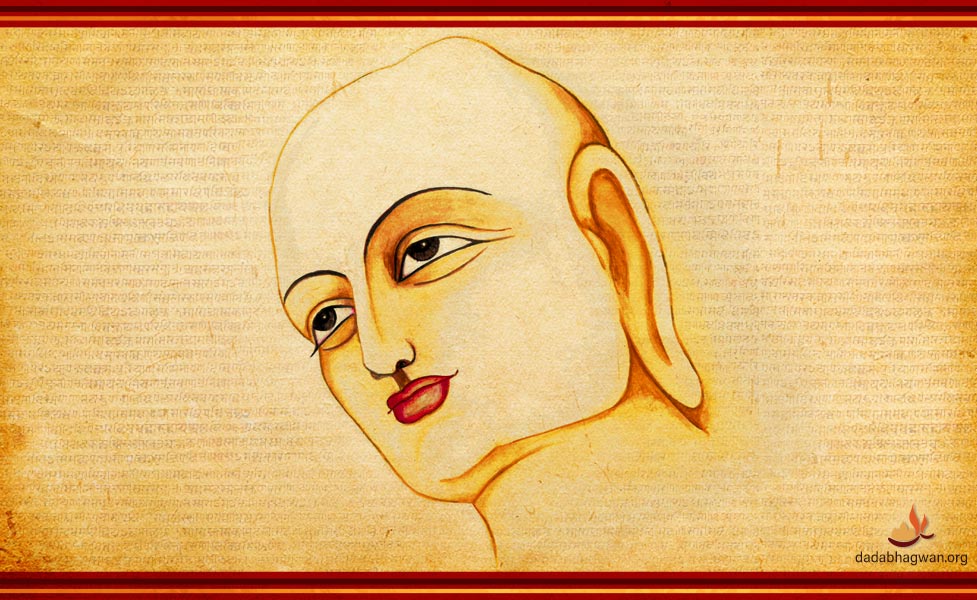 Upon attaining Keval-Gnan, Prabhu went from place to place (doing vihar), and gave Deshna to people. He inspired people to get onto the path of liberation.

Once he arrived in a city named Potanpur where Tripusht Vasudev (one of the past reincarnations of the Soul of Lord Mahavir) ruled. Tripusht Vasudev, upon receiving the message that Tirthankar Shreyansnath Bhagwan has come to his city to give Deshna to people, was so delighted that he donated twelve and a half crore gold coins to the person who delivered him this message. He immediately rushed to the site to do Darshan of Shreyansnath and listen to His Deshna.

Shreyansnath Swami gave a beautiful Deshna on ‘Nirjara’. Nirjara means to get discharged.

The Nirjara of karmas of a Self-realized person is Sakaam Nirjara, which means while their karma gets discharged, no new karma gets charged. It happens so, as they remain vigilant while in the state of being a ‘Knower’ and ‘Seer’. In this state, the awareness is poised at the demarcating line between Self-knowledge and ignorance. They do not become one or engrossed with the unfolding karma, and hence, the karma gets discharged completely; the karmic atoms wither off totally. Therefore, it is highly recommended to learn how to come in this state of Nirjara from the Enlightened people.

He specified that penance is of two types:

The six types of bahya tapa are:

In the 5th ara or period of the current time cycle (as per Jainism) or Kaliyug that we are in, anshan holds the topmost significance amongst all the bahya tapa in the minds of people. The rest have lost their significance in the present era.

‘Anshan’ means to not eat food or ‘fasting’. In Kaliyug, that which is visible is done; one is not able to go into the realm of the subtle. Only a deserving Enlightened One can take one into the sphere of the subtlest.

Anshan is visible. Thus, by watching others doing it, one at once learns to do it. It isn’t wrong to fast; however, there are five other types of penance, but they have been forgotten.

For instance, unodari is an exquisite form of penance. The Enlightened Ones practice it. Shrimad Rajchandra and Param Pujya Dada Bhagwan have emphasized the significance of this penance. While one, with sheer determination, may take up a fast of 4 or 8 days and complete it; however, it seems difficult to do unodari for the entire life.

Unodari means to eat until you are 50% full; meaning to consume only up to 50% of what one’s hunger is or what the stomach demands. Ideally, 50% of the stomach capacity ought to be utilized for food, 25% is to be allocated for water and 25% for air. Hence, during each meal, be it breakfast, lunch or dinner, one ought to eat only 50% of the capacity, whether it is a dish to relish or detest.

Generally, upon being served something that is delicious, one tends to eat 150%. This leads to stomach bloating and spiritual apathy. Therefore, the Gnanis always do unodari. Param Pujya Dada Bhagwan has never fasted in life but has always practice unodari.

With bahya tapa, external purification takes place, i.e., the body and mind purify. However, it cannot take us into the realm of the Soul. That happens through the abhyantar tapa. There are six types of abhyantar tapa, which are:

Prayashchit implies repenting over the committed sins. Vaiyavach means serving the saints. Swadhyay encompasses a constant contemplation of the Soul (the Self, i.e., Swa). Practicing humility is called vinay, while vyutsarg means renouncing the attachment towards the body and dhyan means to meditate. This dhyan goes right up to the point where one begins to meditate on the Soul, which is called shukla dhyan.

With abhyantar tapa, the karma sheds off in true sense. By doing prayashchit, the sins can be washed off. To clear off any sin, it is very important to do pratikraman, prayashchit, and pratyakhyan instantly. It ought to be not merely in words but with heart-felt repentance, maintaining equanimity within. For instance, when someone insults or abuses, one should remain equanimous. On one hand, see the Soul (God) of that person inside; while on the other hand, see that person innocent.

One can see the insulter or abuser innocent based on the right understanding, “The abuse or insult that has come to me through this person is the account of my own karma that is unfolding right now, and hence the other person is innocent. Once the karma has given its result, it will leave. I shall be free from that karma forever then. Therefore, I’m immensely grateful to this person who has helped me attain freedom from this particular karma of mine.”

This is how through the abhyantar tapa, one can be free from all the karmas, attain Keval-Gnan and go to Moksha.

There are some exquisite stories or examples in scriptures, one of which is that of a holy saint who resided with quite a few other saints and practiced monkhood. However, while all the other saints would fast as expected from them, this holy saint couldn’t, as he was unable to remain hungry. Therefore, the other saints boastfully ridiculed him.

There is often a tendency to become egoistic regarding one’s ability to fast, practice religion or do the prescribed rituals regularly. This is sheer ignorance because one who walks on the path of God is always humble, and not egoistic. The one who boasts, “I am right and others are wrong; I am superior, while others are inferior,” is not in religion at all. Therefore, Param Pujya Dadashri has said that all religions are correct from their viewpoint. Seeing faults of others is the biggest mistake, and whenever that fault happens, one must repent for it and wash it away at the earliest. 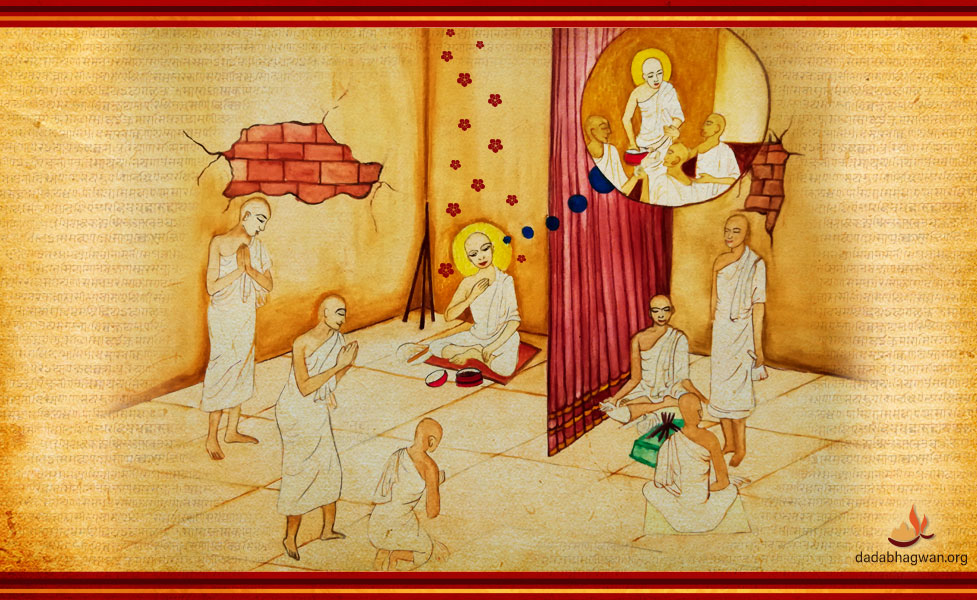 Coming back to the story of the holy saint, the other saints laughed at him over his weakness of being unable to remain hungry. They did so to such an extent that when the holy saint sat for lunch, they used to spit in his plate. However, daily, the holy saint, with utmost humility, accepted this weakness of his whole-heartedly and appreciate the other saints for their ability to fast. He continued to remain equanimous and spent all his spare time meditating upon his Soul, thus, destroying all his karmas one by one. This led him to Keval-Gnan, and he soon attained ultimate liberation, i.e., Moksha. Such are the fruits of abhyantar tapa!

Upon listening to this enlightening Deshna of the Lord, many people took Diksha. In due course, they also attained Keval-Gnan and Moksha.