Sambhavnath Bhagwan Stories: Exploring the Past and Last Births

Sambhavnath Bhagwan was the 3rd Tirthankara of the current time cycle. He had a golden complexion and his height was as tall as 400 Dhanush. His mother was Sena Devi and father was King Jitari of Shravasti. Trimukh Yaksh Dev is His Shaashan Dev and Duritari Yakshini is His Shaashan Devi, respectively. The Lord’s symbol is Horse.

Let’s now go through the life stories of the Lord’s past two births, prior to His birth as Tirthankara. Finally, we will go through the Sambhavnath Bhagwan story.

In His past birth, He was born in the city of Ksehmpuri located in the Airavat Kshetra of the Ghatki Khand Dweep. His name was King Vipulvahan.

He was a soft hearted and a compassionate ruler who loved and cared for his people. He used to help the people living in his kingdom. People used to look at him with respect. He made sure that his people lived happily. He used to award people for good work and used to punish those who did wrong. He was a very down-to-earth King. He never had or showed any ego of his power. 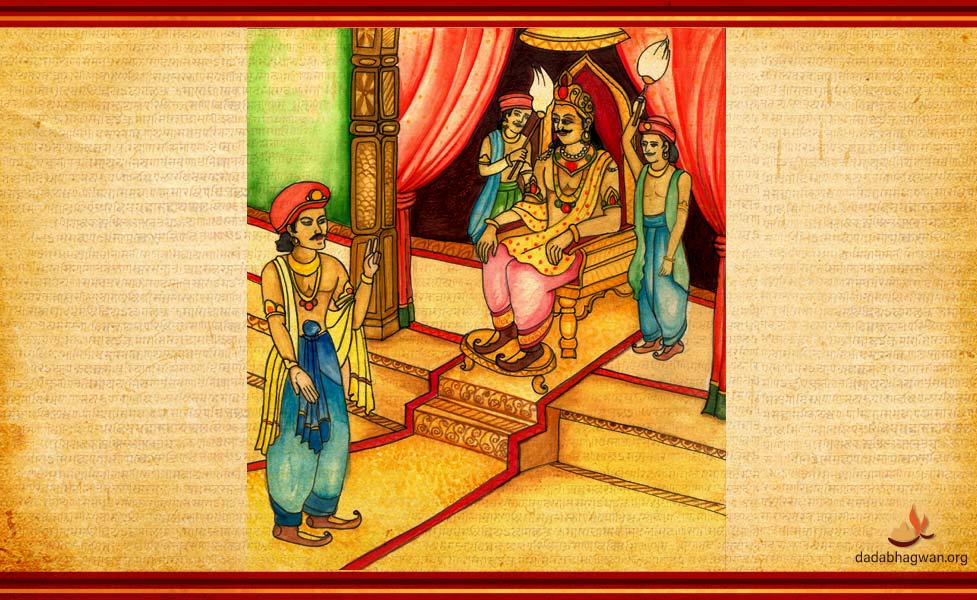 The king was spiritual and was much interested in religious activities. He used to spend his surplus time in mediation, worshipping Tirthankaras and doing spiritual studies. He used to follow the 12 vrats of Shraavak Dharma. Not a single person used to go empty handed from his kingdom. He used to donate with a pure heart. He was very famous for his generous deeds because he used to do it without any ego.

Once, there was a devastating drought and the population was deprived of food and even water. Because of the scarcity of food, people used to eat leaves from the trees. They had a lot of trouble even for getting one bite of food. They used to even fight with the family members for food. They had also started stealing, as they did not have any work. No one was practicing religion.

When the king came to know about this situation and people’s behavior, he felt that it was his responsibility to protect his people. He called his staff members and announced that all of his money, food and water should now be used for consumption of the Chaturvidh Sangh, i.e., the Sadhus and Sadhvis, and Shravaks and Shravikas. He further said, “Thereafter, if anything is left, only that should be given to me, or else, I will fast.” During the drought, there were many occasions when the king remained unfed and thirsty. He did this without any expectation in return.

As a result of this sublime feeling of compassion, King Vipulvahan gained the Tirthankar-naam-and-gotra-karma. After the drought, normalcy returned. One day, while he was sitting on the terrace, he witnessed dense rain clouds and was happy thinking that it would rain but soon the wind scattered them. With this, he thought that nothing can be trusted. Everything is temporary. Thus, a feeling of intense detachment grew in him. His Moha got dissolved and he overcame all worldly attachments.

He decided to take Diksha and progress on the path of liberation. He asked his son to preside over his kingdom. Although not ready initially, his son took the responsibility when the King insisted and handed over his kingdom to him. The King then took Diksha from Shri Swayamprabha Suri.

He started doing severe penance and got rid of all Kashays by doing Pratikraman and became pure. He attained Self-realization. After death, he reincarnated in Anat, the ninth Heaven.

The Last Birth as a Tirthankara

On the 14th day of the bright half of the Margashirsha month, the Queen gave birth to a healthy son. He was ceremoniously named Sambhavnath. By birth, He had come with three types of spiritual knowledge or Gyan namely, Shrut, Mati and Avadhi. The little Prince grew up amidst royal comforts but hardly ever took more than cursory interest in the luxurious lifestyle. At the appropriate age, Sambhavnath was married and crowned. After a long and peaceful reign, upon the request from the celestial deities, He decided to take Diksha. Then, for a year, He gave a lot of donations.

After a year, the ceremony of Diksha took place. All the deities took care of the ceremony. 20,000 other Kings took Diksha along with King Sambhavnath. After 14 years of Diksha, King Sambhavnath attained Omniscience on the fifth day of the dark half of the month of Kartik.

After attaining Omniscience, once the celestial beings made all the arrangements for the Samvosaran (divine assembly) so that the Tirthankara Lord could give Deshna. Until then, no Tirthankara speaks anything.

By overcoming all the karmic coverings, the other person listening to the Deshna can attain Omniscience. That much is the power of the Speech of the Tirthankara. That speech is completely free of all veils of ignorance. So, the Tirthankara-naam-gotra-karma is bound to give Moksha to others. They themselves attain Moksha and many others, too, attain Moksha from them.

The celestial deities make arrangements for the Samvosaran so that the people can benefit from it. They spread the word all over and then the Tirthankara is welcomed to the Samvosaran to give Deshna to people. Sambhavnath Bhagwan gave enlightening Deshna that threw light on the ephemeral nature of the mundane world, which things are temporary and which are permanent. Only the Pure Soul is permanent; all other things are temporary. Not just in words but we should remain in constant awareness of what is temporary.

All the Gandharas (chief disciples of the Tirthankara) used to sit in the assembly. Amongst His Gandharas, His chief Gandhara was Charu. Gandhara Charu grasped full knowledge from Sambhavnath Bhagwan and gave sermons to the people to sow the seed of Moksha in them. Many people attained Omniscience and got free from all the sufferings just by the divine vision of the Lord. 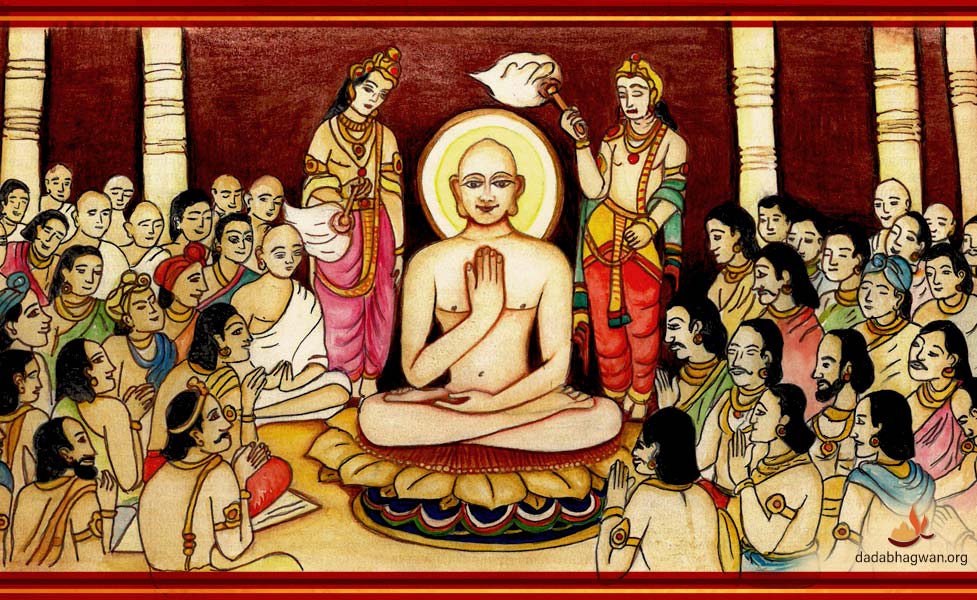 In His first Deshna (sermon), Lord Sambhavnath preached ‘Anitya Bhavna’. He effectively illustrated what all in this world is ‘Anitya’ and what is ‘Nitya’. Anitya means temporary and Nitya means permanent. Not only in words, but it’s important to have it in our constant awareness that what all is Anitya or temporary. The law of impermanence that rules the world should be mulled over at every moment of our life; thinking about the Anitya Bhavna for a while or just temporarily is not enough. The demarcation between what is Anitya and what is Nitya should be clear.

Whatever we can see and experience in this world with our five senses is temporary. Let’s check this out!

Everything is finally temporary! The Soul alone, which is our real Self, is permanent. So, following the theory of Anitya Bhavna and maintaining its awareness can save us from wrongdoings and help us get rid of our attachment.

Sambhavnath Bhagwan further preached the principle of Tripadi comprising of Utpaad (arising), Dhruv, (remaining steady), and Vyay (passing away). There are six eternal elements in this Universe, namely Soul (Chetan), the indivisible, indestructible particles of inanimate matter (Jad), Space (Aakash), Time (Kaal), Motion (Gati sahayak), and Inertia (Sthiti sahayak). Each one has its own Dravya (substance of an element composed of all Guna), Guna (Characteristics or Attributes), and Paryay (Phases). While the Dravya and Guna are permanent, the phases are temporary. The principle of Tripadi applies to the phases, i.e., each phase arises, remains for a period of time, and then passes away. Thus, one realizes how every phase is Anitya or impermanent!

Through this elemental knowledge, one is able to experience the exactness of what is the element of Soul. In Keval-Gnan, the minutest details get revealed spontaneously.

Sammed Shikharji, the most revered pilgrimage site, is the sacred mountain from where 20 Tirthankaras of this time cycle attained liberation. It is considered as the purest place in the world. Sambhavnath Bhagwan was one of those 20 Tirthankaras to reach here and spend the remaining time after Omniscience and before attaining Moksha.

At the moment of His Nirvana, Shaileshikaran took place in which the Soul squeezes from the entire body and goes to the Siddha Kshetra from Brahmarandhra. This is called Nirvana. All the celestial deities performed all the final rites and collected and distributed His remains amongst each other. This is obvious, as all the remains of the Lord are considered auspicious.

By comprehending the Tirthankara’s teachings as revealed in this Sambhavnath Bhagwan story and worshipping Him, even we can progress on the path of Moksha.