Why is Shri Krishna called a Celibate (Naishtik Brahmachari)?

Vallabhacharya started the Pushti path of religion in Hinduism. Five hundred years ago, the Hindu religion was on the verge of extinction. Women could not leave their homes to go to the temples or elsewhere. Acharya Vallabh established the worship of the child Krishna in individual Hindu homes, and thus made the adjustment during a difficult time. This is how he gave support (pushti) to the Hindu religion. But this practice, dharma was meant for only that difficult period in history. Vallabhacharya had said that the religion would last about five hundred years. Today the five hundred years are ending. 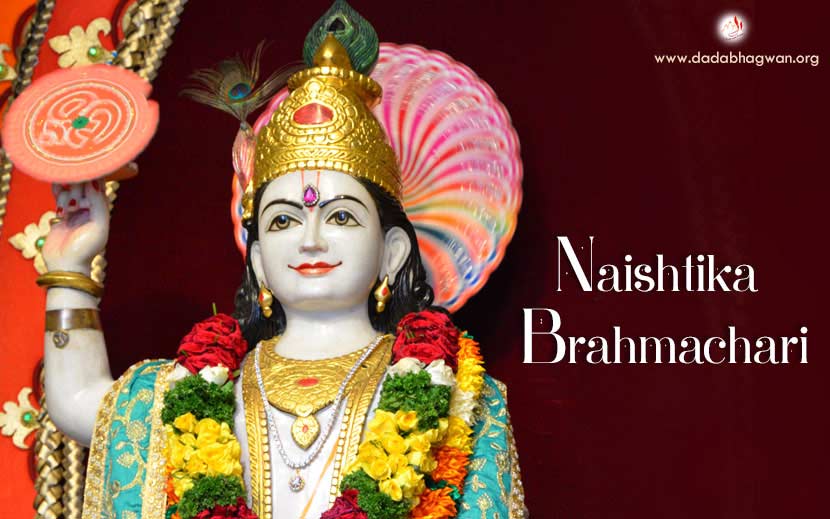 Now the religion of the Soul (Atmadharma) is coming to light. Kaviraj has sung:

The One to expose the enlightened knowledge of Shree Krishna has come.’

Questioner: What does naishthik brahmachari mean?

Dadashri: It means the one in whom there is constant inner intent of devotion and sincerity towards celibacy (brahmacharya). His discharging karmas are that of non celibacy but his charging karmas are of absolute, pure and continuous celibacy. Lord Krishna had sixteen thousand queens and yet he was a naishthik brahmachari (celibate). Let me explain how. If a man steals but his constant inner intent is, ‘I do not want to steal,’ then he has naishthik achauriya (inner intent of non-stealing). This inner intent is the account of what is being charged for the life to come. A man makes a charitable contribution but in his deep inner intent (bhaav) he holds, ‘I should take advantage of these people’, in this case, his donation is not considered a donation for the next life. Everything that one sees and experiences through the senses has no impact and is of no value as far as the account of the next life (charging of new karma) is concerned. What is of significance, and has a direct impact in charging new karma is only one’s inner intent. This is happening simultaneously during all overt and external activities.

Questioner: Then why is Lord Krishna called a man of good conduct?

Dadashri: He was a naishthik brahmachari. His conduct has been criticized by some as being sinful and indulgent. Lord Krishna was a Vasudev. What is a Vasudev? It means one is an enjoyer of everything yet is worthy of moksha. Such a person is an extraordinary person.