What does Om Namo Bhagavate Vasudevaya mean? Why is Lord Krishna referred to as Vasudev and Narayan?

Dadashri: Vasudev Bhagwan! These are beings that have evolved from being ordinary human beings (nara) into God - Narayan. To such beings I bow. When they become Narayan, they can be called Vasudevas.

Questioner: Shree Krishna and Mahavir Swami - who are they?

The Lord otherwise called Vasudev, manifested within Sri Krishna. There is no doubt about this, right? Vasudeva is Narayana, the supreme Lord, who manifest in a human being (nara).

Lord Mahavir and Lord Rushabdev were absolute and complete manifestations of the Lord. Lord Krishna is called Lord Vasudev. He has one more lifetime left.

From Human Being To The Lord

Questioner: Can you explain in detail the mantra 'Om Namo Bhagavate Vasudevaya'? 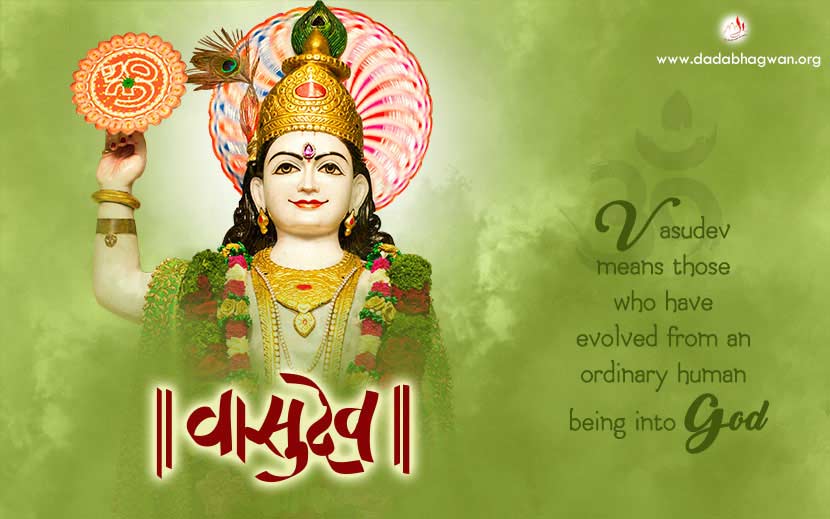 Dadashri: Starting from the time of Lord Rushabdev until now, there have been nine vasudev bhagwans. Vasudev means those who have evolved from an ordinary human being into God; that state is called vasudev. There is no penance or renunciation here. Along with every vasudev, there will also be their opponent called a prativasudev (prati - opposite). On the one side a vasudev is born and on the other a prativasudev. They are the Pratinarayan! The two will engage in a battle against each other. Also along with these two, there will be nine baldevas, as brothers or stepbrothers of vasudev. Krishna is vasudev and Balram is baldeva. Lord Ramchandra was not a vasudev, he was a balram. Laxman was vasudev and Ravan was prativasudev. However, Ravan too is praiseworthy; he is extremely praiseworthy. But people in India make his effigies and burn them instead. How can this land be blessed? How can this country be blessed where the wrong kind of knowledge is spreading? They burn effigies of Ravan, they don't even know what Ravan was!

What are these vasudevas like? They are so powerful that thousands of people can be moved to fear by mere look in their eyes. What is the indication of the cause (karmic) for becoming a vasudev? It is when a person can die from fear by merely looking into their eyes; such is the power they possess. These qualities are apparent in a vasudev-to-be many lifetimes ahead. When they walk, the earth would shake! Yes, the earth actually makes a noise when they walk, and this happens many lives ahead to them becoming a vasudev. The cause (karmic) of becoming a vasudev is very different. Their very presence causes chaos in the world. Talks of vasudev is a different matter altogether! One can tell a vasudev at the time of his birth. A vasudev-to-be can be recognized from many lives ahead because of his attributes. A tirthankar-to-be cannot be identified but vasudevas can. Their characteristics are entirely different altogether. The same goes for the prativasudev!

Questioner: So how can we recognize a Tirthankar before his time?

Dadashri: Tirthankaras are simple people. Everything about them is straightforward. Nothing wrong comes to them. If it does they strive hard to come back to their straightforward ways. Their linage is different altogether! But the vasudev and prativasudev have their traits many lifetimes ahead. And for one to become a vasudev means to go from being a human into Godhood! This transition is like the phases of the moon; from the moonless dark nights of the month towards the full moon. Can you not know there will be a transition towards full moon from the waxing moon? In the same way, one can know that this person is going to be a vasudev.

These above-mentioned fall in the category of the sixty three Salaka Purush (best of men). These sixty-three are those who have received the seal of approval that they have the qualities of being God. So if we only pay obeisance to the arihants and not the vasudevas who are future arihants; if we say anything negative about them, what consequences will we have to bear? Some People make comment and criticize, "…this happened to Krishna, that happened to Krishna…". Beware! You cannot say such things. Don't say anything! What you have heard about him is a different matter! Why are you risking such grave consequences? Lord Krishna is going to be a tirthankar in the next cycle of twenty-four tirthankaras ordained for this world. Ravan too is going to be a tirthankar in the next cycle. Why do you take on unnecessary liabilities?