Facts and myths about God Krishna

God has not played raas-leela at all. Who told you that Lord Krishna did that? These are just stories. Lord Krishna was a great Yogeshwar (the one who had attained the Self through yoga). People have misused this by associating Him with raas-leela. 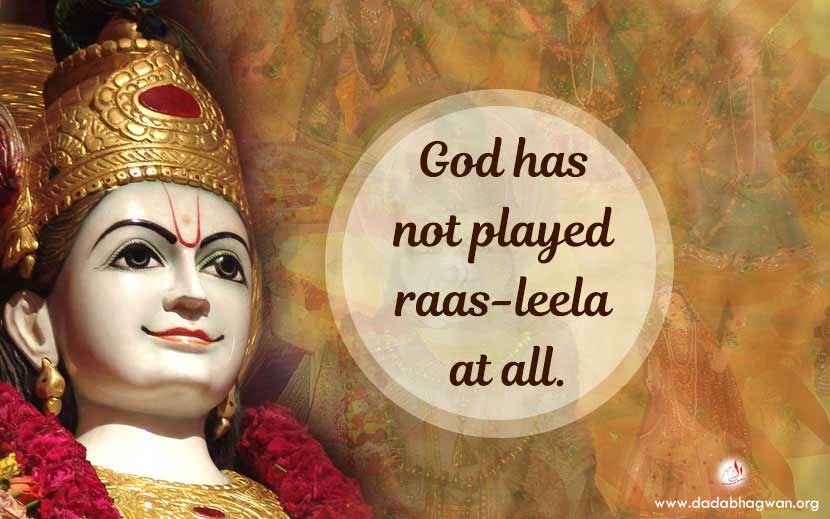 There are two methods by which Lord Krishna can be worshipped. People of the elementary level of spiritual development should worship the form of Balkrishna (the child Krishna) and those who want to attain liberation (moksha) should understand and attain the knowledge of the Self expounded by Yogeshwar Krishna in Bhagwad Gita. What do you want out of these two methods?

Dadashri: It is the samyak darshan (enlightened world view, Self-realization) that Lord Neminath bestowed upon him. Sudarshan (right darshan, 'I am the Self') means samyak darshan but people depicted this in a graphic form and everyone thinks it is a weapon which cuts people.

The 5000 year old story about the cobra named Kaliya is really a metaphor. It is said that the child Krishna came and conquered the huge terrifying cobra that used to torment everyone. There was no such act performed by the child Krishna. When you get upset and angry, that verily is the cobra. The other cobra needs a snake charmer to bring it under control. Why would Lord Krishna need to extract the venom from the cobra? What need does he have to do something like this? Could they not find any snake charmers? Really, people do not understand the real meaning and yet this metaphor of the cobra and the misconception continues even today. Krishna is to be found wherever anger has been conquered (kaliyadaman). Krishna (the Self) is to be found wherever kaliyadaman takes place. The cobra in kaliyadaman is anger and when one gains supreme control over anger, he becomes Krishna. The one who can crush his karma is Krishna.

Lord Krishna had bound a niyanu. What is a niyanu? It is a wish in exchange for what you have. It means to spend all your earned punyas (merit karmas) towards the fulfillment of that wish. Lord Krishna was a Vanik (trader class) in His past life, and as a Vanik He had suffered rejection and abuse everywhere He went, and then He became a sadhu. As a sadhu, He did tremendous penance and renunciation. What did He wish for in exchange for all his austerities? Did He wish for liberation or any such thing? His wish was that He should be worshipped by the whole world. Therefore, His punya was spent in the niyanu of wanting to be worshipped. Today His niyanu is five thousand years old.

Where the Gnani Is Awake, the World Is Asleep

Questioner: Lord Krishna has said, ‘Where the world is awake; I sleep, and I am awake; where the world ‘sleeps’.’ I do not understand that statement. Please explain that.

Dadashri: The world is awake in worldly matters; that is where Krishna (the Self) ‘sleeps’, and where the world is ‘asleep’ (in the matters of the Self), Krishna is awake.