Is the story of Lord Krishna lifting Mount Govardhan true? What is this Krishna Leela?

A Safe-Haven for Cows Established by Lord Krishna

Many domestic animals were being slaughtered during Lord Krishna's time. What did Lord Krishna do to stop this? People say that he raised the Govardhan Mountain on his fingertip. Govardhan means to increase the population of cows. This is a metaphor for what he really did, which was to single-handedly save the cows from being slaughtered. People in India depend on domestic animals for their livelihood. Lord Krishna's aim was to protect these animals and increase their population and so he established shelters for cows, which in turn led to an increase in dairy production. He did this single-handedly, hence the symbolism. It is not necessary to protect animals that are violent, like cats, dogs and carnivorous animals. No one uses them for food. Cows need protection because they provide food for humans. Therefore, the protection and propagation of cows is a worthwhile cause. 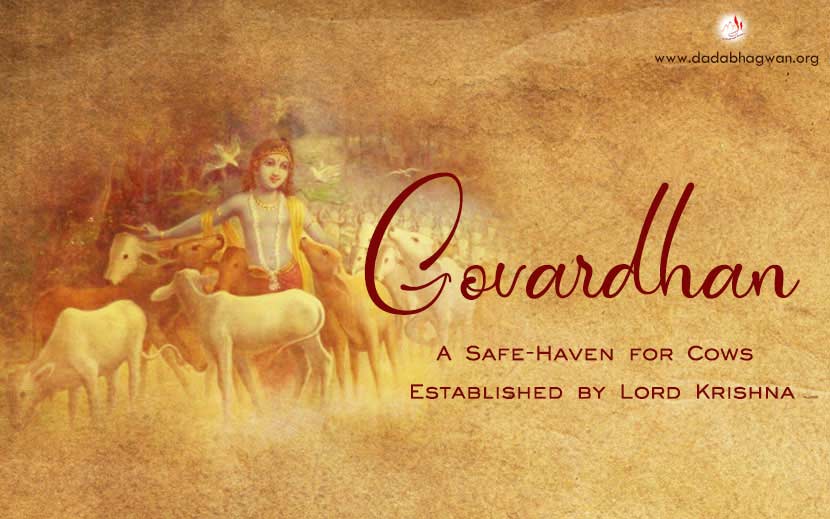 For the time being, more than protecting the cows, it is very important for you to focus on how to increase their population. The benefits derived from their milk and dairy production is invaluable. Instead of forcing people, if you were to explain to them and ask them to volunteer to help establish a custom of keeping cattle in all the villages, then the population would increase. All one needs to worry about is protecting the cows and educating people about the benefits of increased dairy production. At the moment there is no increase in the population of cows and yet the slaughtering continues. We may hesitate in speaking up against the violence, but at the same time it is a sin to remain silent. We are not doing anything wrong; we are trying to prevent violence.

Questioner: We are not asking that the cows be set free from the clutches of the butcher, but we are trying to prevent new cows from reaching them.

Dadashri: Yes do try to save the new ones from reaching the slaughter house. You should explain to the real owner that he should not do such things. For the time being you just need to concern yourself with protecting the cows and trying to increase their population. Everything else is secondary. Once these rules are established, then you can go on to do other things.

Questioner: 'Govardhan'. This is a completely new meaning for this word.

Dadashri: Yes, these are all just various events, which took place, but they can only be beneficial if they are interpreted correctly. People turn them into mere folklore and scientists dismiss such stories as myths. Naturally they will question how a person can hold up a mountain on his fingertip! And if Lord Krishna did carry it on his fingertip, why then did he not carry the Himalayas? And if he could perform such incredible feats, why then did he get shot with an arrow and die? But in reality it is not like this.

He enforced Govardhan - the propagation of cows- in a wonderful way, because during that time, tremendous violence was occurring. One should not have any violent intent. Man should be non-violent in intent. One is considered to have non-violent intent when one dedicates one's life towards the cause of non-violence.