What is the Geeta Saar and Bhagavad Gita summary?

Questioner: Why did Lord Krishna tell Arjuna to fight the battle of Mahabharata?

Dadashri: At that moment Lord Krishna was the nimit for these words. Arjuna was overcome with worldly attachment. In spite of having the duty (dharma) of a Kshatriya (those meant to perform the role of a warrior), he was overcome with attachment (moha) for his brothers and teachers who were posing as his enemies. To remove this delusion, Lord Krishna cautioned Arjuna and said, "Remove your illusion. Come to Your dharma. Be the Self. Do not become the doer or the non-doer of karma." Lord Krishna knew 'vyavasthit' and so whatever He uttered was within the laws of vyavasthit, but people do not understand this and so they question why the Lord being a Gnani would say, "Kill them all." This instruction was applicable for that moment, but it was not an instruction for the duration of his entire life. Seeing all his relatives around him, Arjuna was overcome with attachment and affection. Lord Krishna knew that his attachment was temporary and that is why Lord Krishna spoke to him as a nimit (not the owner of the words). He told Arjuna, "You are a Kshatriya and your parmanus (prakruti's constitution) are such that they will not refrain from fighting. This I can see in my Gnan that your vyavasthit is thus. Therefore, do not have this false attachment (moha). In order to kill, carry out your actions without attachment. Do not have this ego of, 'I am killing all these people.' 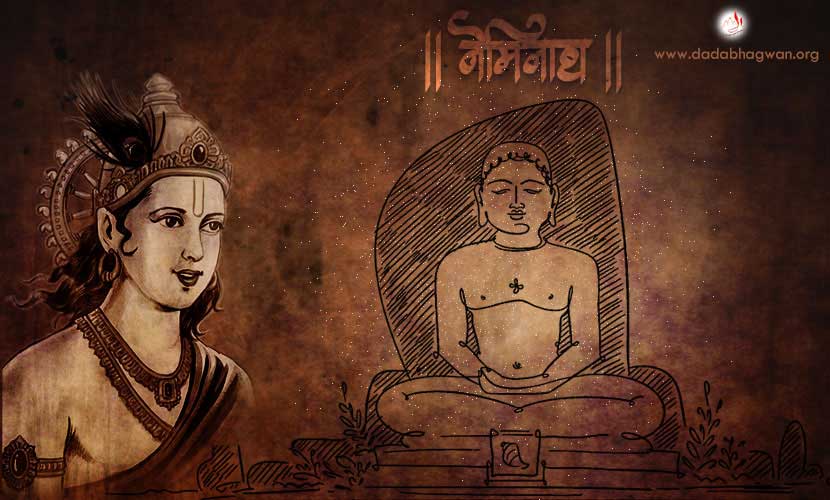 Lord Krishna had attained a divine inner vision (divyachakshu) from Lord Neminath and only thereafter did He give instruction in the Gita.

Lord Krishna is trying to say only two words in the Gita. People cannot understand those two words and that is why he had to create the whole Gita and just to understand the Gita, people have written commentaries. Lord Krishna, Himself says, "Only one out of a thousand people will understand the gross or overt (sthool) meaning of what I am saying in the Gita. Out of thousand such people, only one can understand the subtle (sookshma) meaning of what I am saying. Out of one thousand such people, only one can understand the subtler (sookshmatar) meaning, out of those who understand the subtler meaning, only one can understand exactly the essence (sookshmatam) of what I am saying." (One in a trillion) Now out of three and a half billion people, who would qualify to understand what Lord Krishna was saying? Only the one, who has become Krishna himself, can say what Lord Krishna was trying to say in the two words. No one else can. Today, 'we' have come as Krishna so whatever work you need to get done, get it done. What did Lord Krishna mean? When a person dies, what is it that leaves when people say, "He left the body?" That, which leaves, is the 'real thing' and whatever is left behind is the 'packing'. What you see with your physical eyes is the packing and the material (Soul or Atma) is within. There are varieties of packings. Some are in the form of a tree, some in the form of a donkey, some in the form of a man or a woman, etc., but the material, the content within each is the same. The packing can be in any form; it can even be rotten but a businessman is not really concerned with the outer packing, he is only concerned with the material within. Similarly, you should do the darshan of that material (the Self, the Lord) within the packing (body).

Lord Krishna says, "The 'material' that is within is precisely what I am; that verily is Krishna. Recognize Him and you will find what you are looking for. Otherwise, even if you sing the verses of the Gita for millions of lifetimes, you will not make any progress." Whatever Lord Krishna is saying is conveyed in these two words: 'packing' and 'material', but these so called smart people try to find the meaning in the Gita and publish books in the process. They do not know how to extract the essence of His message and then they write volumes of commentaries and criticisms in trying to extract the essence. They do this out of their own intellectually driven agendas (swachhand) in order to gain recognition and fame. But the entire inner intent of Lord Krishna is within these two words.

In the old days a son understood his father even with an age difference of twenty-five years but today one does not have the inner ability to understand what the father is really trying to convey. So how is anyone going to understand what Lord Krishna was trying to convey? There is a lot being written about the Gita but the author himself does not understand even a hair's worth of the essence of the Gita. This is like the blind leading the blind. It is all useless. It is like that. Yet it is not wrong; it is correct but it is all comparable to a teacher of the first standard. Here with 'us' the talks you hear are comparable to the level of Ph.D. These commentaries on the Gita are like the teaching in the first year of school. One can only get complete information on all the scriptures from a Gnani Purush.