How does a strong mind help to keep fear and suspicion away?

Do not initiate any task that invites suspicion. Wherever suspicion occurs, do not proceed with that work or stop that work.

Say a group of pilgrims are leaving for Ahmedabad from here. Some in the group say, 'We will not reach there if it rains.' What do you have to do with such people who are inclined towards suspicion? If there are two or three such people, you have to send them back or else they will ruin the whole group. Nothing can be achieved as long as there is presence of suspicion. A person with suspicion will not be able to do any work. He may be able to turn around with a lot of effort, and if he does, that is good. Then everyone will be happy. 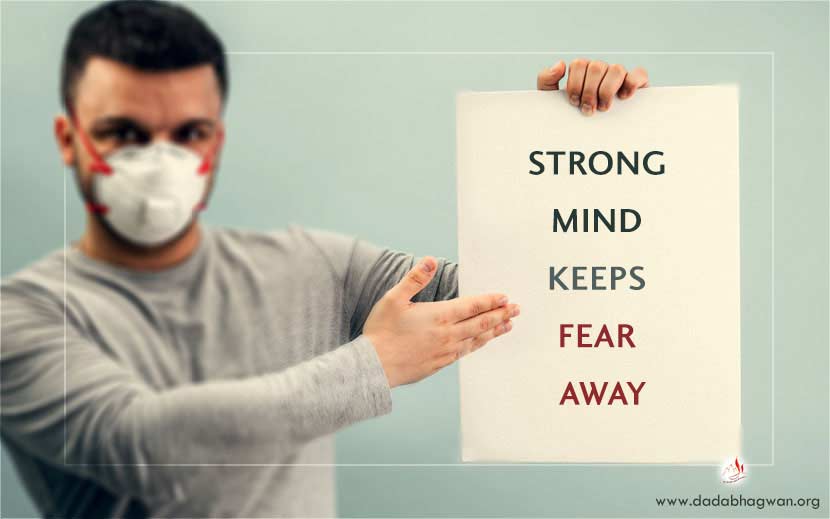 If a person is fearless, then if someday he decides to take matters in his own hands, he will be able to accomplish whatever he sets his mind to. Therefore, you should have fearlessness such that you are convinced that nothing can happen to you. If you want to take poison then you can but who is going to make you take it if you do not want to?

If your driver tells you, 'What if we have an accident?' You should tell him, 'Stop the car and get out of the car.' You should not let such a person even touch anything. Do not go around with such a person; he will ruin your mind. Why should there be any suspicion? The mind should be clear and without suspicions. Any kind of thoughts may come but are we not the Purush (the Soul; the Self)? Man will die if he is not a Purush. Having become a Purush (attained the Self), how can you have suspicion in your purusharth? How can you have suspicion about your own Self? Why should you have any fear after becoming the Purush? For you the state of swa-purusharth and swa-parakram have arisen, i.e. for you, you have come into your own domain as the Soul; you are the 'Knower' and the 'Observer' and your energies of the Self have arisen, so why fear anything?

Questioner: Do we have to maintain fearlessness or does this state automatically remain?

Dadashri: You have to maintain it. Even if you do not think about the possibility of an accident, is it going to stop from occurring if it was meant to? And what about the person who thinks about it? It will occur for him too. But a person who sits in the car without having such thoughts is what we call fearless. Such people are likely to get less injured and will come out of the situation with minor injuries.

After sitting in a train, does a suspicion of 'two days ago there was a train accident, what if that happens today?' arise? Why does such suspicion not arise? Therefore do not have any suspicion in any work that you have to do and if you have suspicion, then do not attempt that work. Do either this or that. How can we accept such things? To anyone who talks this way with suspicion, tell him, 'Not here, go home.' We need talks of fearlessness (shooraatan) here.

You want to go home and if someone keeps saying, 'What happens if we have an accident on our way home?' Then what will become of everyone's minds? Do not allow such talks. Why should you have such suspicions?

If you are walking along a beach and someone says, 'what if a huge wave comes and washes us away?' Someone may have told him about an incident where a person drowned in a big wave. So what happens if you start to become suspicious? These are all foolish talks. It is a fool's paradise!

So there should be no suspicion in the work you are doing and if suspicion does arise, then do not proceed with that work. Your work will not be successful from the moment you start to have suspicions about your work. Suspicion that prevails is a nuisance caused by the intellect (buddhi).

Besides, such things do not happen. Problems are created for those in whom suspicion arises. The rule of the 'king of karma' is that he will visit the one who has suspicions. He will not stay where there is no tuber of suspicion. Therefore, keep a strong mind.