Is fearlessness (nirbhayata) a result of being completely suspicionless (nihshankta)?

Wherever there is suspicion, there is misery. And 'I am pure Soul', is the state of suspicion-less-ness (nihshankta). Nihshankta is moksha. One's spiritual work will be done only when one becomes without any suspicion whatsoever. So you can ask anything you want here. This Gnani Purush is here to get rid of all your suspicions. The Gnani can make you nihshank when all kinds of suspicions arise. Suspicion-less state gives rise to fearlessness (nirbhayta). Fearlessness then leads to the state of being asang. The one who is asang is not associated whatsoever with any activities of thoughts speech or actions, even as they are being carried out. Asangata verily is moksha. 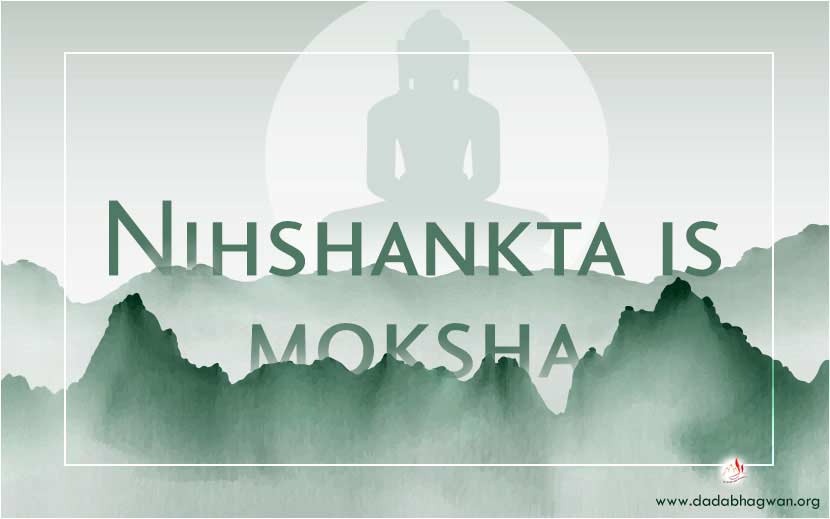 'Suspicion less state (nihshankta) gives rise to fearlessness (nirbhayta) and because of that one attains the state without any association (nisangata).'

Now the suspicion referred to here is different from worldly suspicion. It means suspicion that occurs starting point of gnan, the pursuit of spiritual knowledge, the entry into path of liberation to the final liberation. All this suspicion is regarding the Self. Up to what point is it considered suspicion? To the point where one no longer has suspicions about the Self; to the point where there are no suspicions or uncertainties about what the Soul is and what it may not be. Until then one will not attain the state devoid of suspicions (nihshankta). When one attains the state free of suspicions, then no energy in this world can create fear. Absolute fearlessness is nirbhayta. And when one attains the state of fearlessness, then despite all company and associations, he is nisang - meaning he is aloof, without association (independent). Despite grave and threatening associations and connections, there prevails a state of absolute freedom and that is moksha. That is what Krupadudev is saying.

There is not a single person in this world that has become completely free from suspicions about the Soul. Had anyone attained this state, he would have found liberation and he would have helped another five people or more achieve the same. But instead people are wandering aimlessly and so is he.