What to do when people bring me down when I am succeeding in life? How to deal with jealous people? 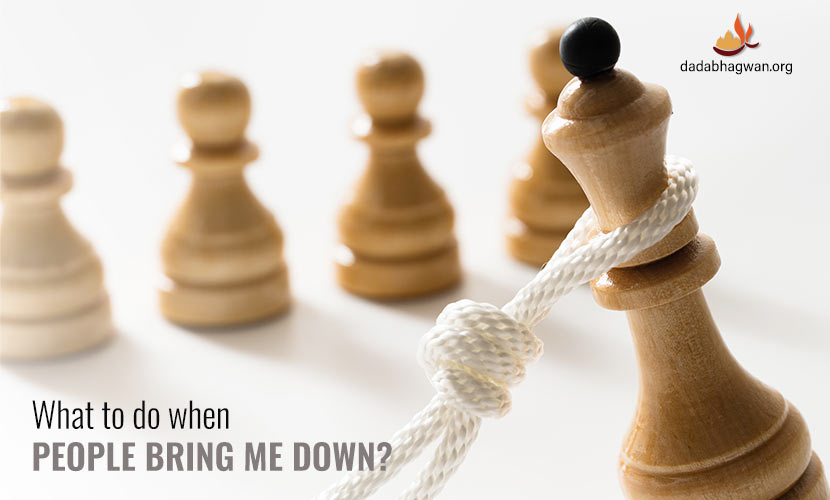 Successful people are crushed down

In competition, the process is such that in my communities if one’s son is making progress, they support him and also protect him. Whereas in some communities, if three sons are progressing equally and if one son falls behind, his brother, his parents will lift him up and bring him forward, but if he progress one step further [than the rest], the father will crush him and bring him down. Why? Because the father cannot bear that his son is more successful than him but he can’t bear his son falling behind either. I have especially seen this in certain communities. No father will let his son surpass his own success. One way or the other he will pull the poor boy down. Then I discovered (found out) something so I told everyone in the family ‘all of you prosper well and beat me down. Come learn the skills from me and succeed and then come to beat me down. Become like that but do not fall behind’. Others do not let anyone to beat their own success. I have seen especially this. Even people in your community do not allow others to succeed. There are some that let others succeed in a nice way and some will beat others so that they fall behind. Hey you, you surpassed your father’s success? So it’s very difficult these days, in this worldly life. What would one’s ego not do? It will bring everyone down. Would they bring everyone down? If they can’t bring one down, they will destroy him. And if your own brother is being very egotistic with all of you, then you will all get together and beat him up to a pulp. Yes, they will make him suffer, without which he won’t straighten up. To straighten him up they will make him suffer. Why is that? Because, when he becomes too egotistic that even his father cannot tolerate it. The attribute of the ego is so futile, that even the father would not tolerate it. Even his brother would not be able to tolerate it. Even the brother will give his blessings that let everything becomes well for him as soon as possible. This ego is a very big thing. If one wants to surpass his brother’s success, he must maintain humility, only then will they let him progress, otherwise they will beat him to a pulp. This is the worldly life! On the one side one’s ego has arisen, ego means through vikalp (the wrong belief of I am *Chandubhai).The self’s vikalp means egoism (ahamkar). ‘I’ and ‘I did it’ – so everything carries on from there. Thereafter he takes a beating but the ego will not set him free. Because after a while he will feel, ‘these are my four bullocks, these are my cows. I am greater that all these people, am I not? I am greater; this awareness prevails, so these people indeed have no dukh (pain-suffering) at all! Even if an emperor were to give it to you, it is not worth taking. Once you enter it, there is boundless unhappiness. Instead, why not go to our own town (Self), there is no happiness like that anywhere. There is no happiness anywhere else like that of the happiness of your own domain.

*Chandubhai =  Whenever Dadashri uses the name 'Chandubhai' or the name of the person Dadashri is addressing, the reader should insert his or her name for exact understanding.