Michhami Dukkadam is a word of the Ardhamaagdhi language (language spoken during the time of Lord Mahavir). By Michhami Dukkadam one is trying to say, ‘Mithya me dushkrutam’ meaning, ‘May my bad deeds (dushkrut) become fruitless (mithya).’ From this meaning we can understand that this phrase is not simply something to say on the day of Samvatsari (a day of forgiveness in Jainism) to whoever you meet, the way you wish others a happy new year. This phrase is a way for us to express our remorse for the mistakes that we have made. This remorse is the pratikraman (to confess, apologize and resolve not to repeat a mistake) that is done on the Samvatsari day. Then this begs the question, ‘If we make mistakes throughout the year, then why do we only do pratikraman on a single day?’ Come, let’s understand from Absolutely Revered Gnani Purush Dada Bhagwan the true meaning of pratikraman in his language. We will also learn what Lord Mahavir had meant when he had talked about pratikraman. 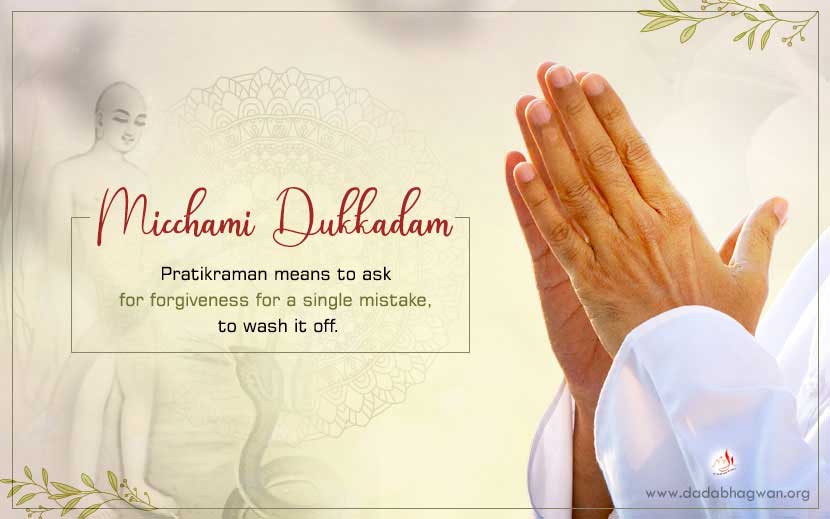 Why has the world come into existence? It is due to atikraman (aggression towards other living beings through thoughts, speech and action). Kraman (neutral actions; actions that do not have any good or bad implications) alone does not cause any problems. For example, if you go to a restaurant and break two dishes, and leave after paying for them, then it is not considered atikraman and, therefore, pratikraman is not necessary. But if you tell the manager that his waiter has broken them, then that is atikraman. Pratikraman has to be done for the atikraman that was done. Everything else is just kraman anyway. Natural and spontaneous talk is kraman, and there is no problem with that. However, atikraman occurs in this inevitably. Therefore, do pratikraman for it.

What is the Difference Between Bhaav and Dravya Pratikraman?

You should keep the intent that this should not be so. That is called bhaav-pratikraman (pratikraman done through inner intent). And if you have to say it word for word; if you have to say whatever words have been written, that is called dravya-pratikraman (pratikraman done through action). Like if the doctor has given us medicine which is meant to be applied on the skin, but we end up drinking it. This is the same way that we have taken the pratikraman that Lord Mahavir had given us in the Ardhamaagdhi language and memorized it; we have drank the medicine which was meant to be applied on the skin. Can pratikraman be considered complete just by saying Michhami Dukkadam to each other on the single day of Samvatsari? It’s not like that. Pratikraman without understanding helps you just as much as if a European person were to ask you for directions and you gave them the directions in the Gujarati language.

What Can Be Referred to as Exact Pratikraman?

Pratikraman means to ask for forgiveness for a mistake; to wash it off. If there is a stain on your shirt, then you should wash it off. True pratikraman is pratikraman that makes you feel light, and if that mistake ends up happening again, it really bothers you. The one who does true aalochana (confession) and pratikraman, they will certainly attain the Self.

Absolutely Revered Dada Bhagwan says, “Pratikraman has such a powerful effect on the other person. If you were to do one hour of pratikraman for someone, their internal state would change. An amazing change would come about in that person.

Pratikraman is the greatest weapon!” So come, let’s read a beautiful conversation between Absolutely Revered Dadashri and a seeker on this very topic!

Questioner: Bad karma are erased by doing pratikraman. What is the science behind that?

Questioner: Then everyone will continue to do wrong and then ask for forgiveness.

Dadashri: Yes, you can continue doing wrong and continue asking for forgiveness; that is what the Lord has said.

Questioner: But one has to ask for forgiveness with a sincere heart, right?

Dadashri: A person who asks for forgiveness does so with his heart. It will even suffice to apologize insincerely, as long as the apology is made.

Questioner: Then it will just become a habit.

Dadashri: Even if it does become a habit, it is fine as long as one asks for forgiveness. If he doesn’t, then he is in serious trouble. What is the meaning of asking for forgiveness? That is called pratikraman. And what is a wrongdoing called? It is called atikraman.

What should be ones goal in this human life which is so rare? No matter what the worldly goal is, the ultimate goal should be to become free from all faults and to attain liberation. For that, heartfelt pratikraman for atikraman is needed. These faults that occur are effects, results. Pratikraman destroys the causes of these faults and eradicates them. It is Lord Mahavir’s established principle that if one does true, heartfelt pratikraman for any fault, then he can become free from the associated vengeance in this life itself. And if he establishes a link with this incontrovertible principle of pratikraman, then the experience of the Self is not far away.