How to eliminate vengeance from a relationship?

Questioner: Let us say that a relationship based on deep abhorrence and vengeance has occurred. If we do not do any pratikraman, will we not have to meet the other person sooner or later to settle the account?

Dadashri: It has nothing to do with the other person. He does not have to settle anything. You will remain bound.

Questioner: But aren't we supposed to settle the account?

Dadashri: The fact that it has occurred means that you have become bound, and so you must do pratikraman. Everything heals with pratikraman, which is why you have been given this weapon.

Questioner: When we do pratikraman, we get rid of our bitter feelings of vengeance, but what about the other person? What if he still feels animosity towards us? 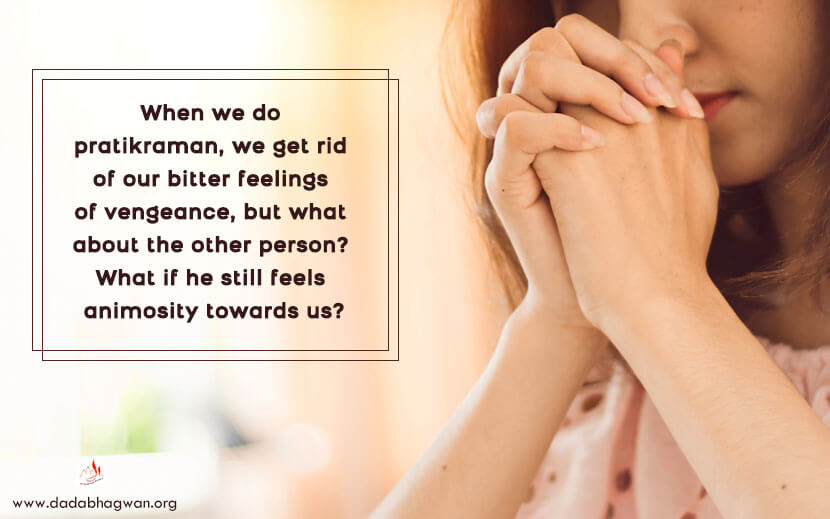 Dadashri: What did it matter to Lord Mahavir when those around him felt so much attachment towards him? Some even hated him. Nothing affects the Vitarag. A Vitarag goes around without putting 'oil' on his body. Nothing of the world will stick to them (they will not be affected by them). Others spread oil over their body before going outside and resultantly they will become covered with the dirt and dust of the world.

Questioner: There is animosity between myself and another person. There has been a lot of attachment and consequent abhorrence between us. While I have managed to get rid of my animosity, the other person still continues to harbor deep vengeance. Does this mean that in my next life, he will come to settle the account? After all, he is the one perpetuating the abhorrence.

Dadashri: With pratikraman, his animosity towards you will lessen. With each pratikraman, a layer of karma is shed. Karma comes in layers, as do onions. You will have to do as many pratikramans as the number of layers you have caused. Do you understand?

2) As long as attachment-abhorrence (raag-dwesh) exist, one will not experience the Self (self realization will not occur).