Questioner: Is it true that the spirits of one's ancestral fathers (pitrus) are summoned in the ritual of Shradh?

Dadashri: Who can be called an ancestral father? It is the son, the father and the grandfather - they will become the ancestral fathers eventually. The fact that a father dies is because his ties are completely over with the son or anyone else in the family. The current body is discarded when all accounts with current relatives are settled.  They never meet again. If, however, a new relationship has been established in this life, they will take birth in situations where they may meet again. 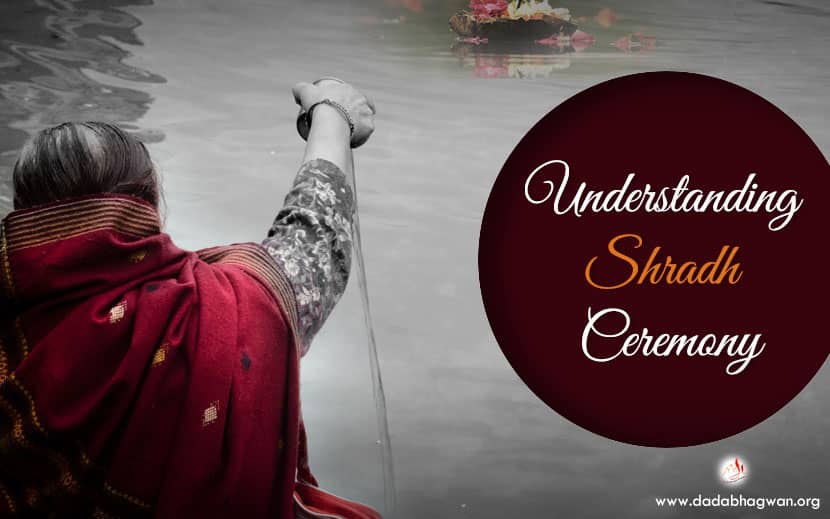 Questioner: So are all these rituals created to remember the dead?

When people fast, it is done for health benefits  according to Ayurveda. The practice of fasting is established for the benefit of everyone. Even fools will benefit from this. That is why several different days have been established for fasting, one of them being the Shradh. So the ritual of Shradh is for a very good reason.

Questioner: Dada what is the purpose of the ceremonial offerings of vaas - dinner with  kheer (rice pudding) etc. on the anniversary of the death of a relative? Is this done out of ignorance also?

Dadashri: No, that is not ignorance. There is a long history behind this ceremony of  vaas.  Shradh lasts for period of sixteen days, beginning on the eleventh month from the bright half of the lunar month. Now, why did people start such a ritual? These people were indeed very clever!  It is a very scientific ploy and this was discovered many years ago.

In India the rainy season occurs during the eleventh month of the Indian calendar. During this time, malaria is widespread because of the increase in mosquitoes. At least one person in every household would contract it. The inflicted person would become bed-ridden and lie on the cot outside his home with fever and other symptoms common to malaria. The fever due to malaria, is the fever of  pitta (the forces that stimulate bile production) and not that of kapha rayu (excessive mucus or gas respectively). Pitta,  kapha and ayu are Ayurvedic terms, which denotes the three main bio-physiologic compositions of human beings). During a bout of malaria, one produces an excessive amount of pitta, which attracts mosquitoes. People realized that the disease of malaria would destroy half the population, so they had to come up with a solution to fast. In order to bring down the fever, they discovered that a diet high in milk products reduces the excessive production of bile. That is how kheer and other dishes made from milk became popular during shradh. Ordinarily people could not afford to make kheer everyday.

In reality, the dead do not benefit from these rituals at all. But people have so much greed that they are not willing to give even a dime to charity. That is why the ceremony of Shradh was contrived so that they would spend their money indirectly and feed people to honor their late father.  And this is how people became convinced. If an obstinate person like myself does not follow the tradition, people around him will nag and pressure him to do so.

Throughout the sixteen days of Shradh, beginning with the full moon, families would take turns to feed everyone and this is how eating kheer for fifteen days became a common practice. This tradition became convenient because the responsibility to prepare the meals fell on everyone equally and so people did not object. At that time people would even say that if a sick person lived through the sixteen days of Shradh, he would be fortunate enough to welcome in the Navratri (festival of the worship of goddesses during the nine days of the bright halves of Chaitra  and  Ashvin  months)!


Get more details on "Noble use of Money"