What are the consequences of suicide?

Questioner: What life form does one take when he or she commits suicide? Do they take the form of a bhoot (ghost) or pret (spirit without body after death)? 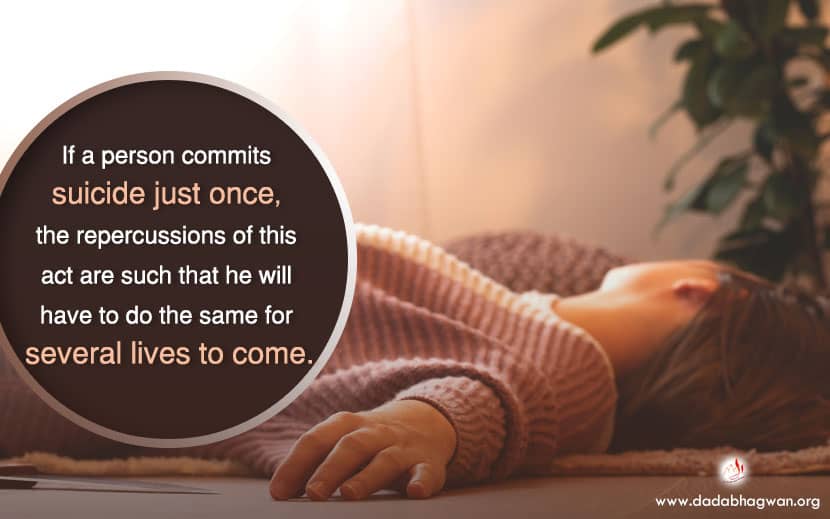 Dadashri: After committing suicide, one's spirit or Soul wanders around. In fact, by committing suicide one invites more problems. If a person commits suicide just once, the repercussions of this act are such that he will have to do the same for several lives to come. When a person commits suicide in this life, it is not a new suicide. The suicide of this life is the effect of suicide committed in the past. It is because of such effects, that one continues to commit suicide, life after life. When one commits suicide, he has to wander around without a body.

A ghost is a different thing altogether. It is not easy to become a ghost; it is an incarnation in the celestial life form. One becomes a ghost when one has performed severe penance and austerities in ignorance.

Questioner: Why do thoughts of suicide occur?

When natural and spontaneous thoughts cease, negative thoughts begin. He becomes immersed in complete internal darkness and is not able to 'see' anything. Sankalp means 'my' and vikalp means 'I'. When both these stop, a person will think about dying.

The root cause of suicide is that in one of his past lives he had committed suicide, the effects of that act is carried forward through seven more lives. When you drop a ball from a height of about three feet, it will bounce back up and with each subsequent bounce, the height it bounces up is reduced and eventually the ball ceases to bounce. That is a natural process, a natural principle of motion. Similarly if a person commits suicide just once, then this act is perpetuated for seven more lives. The intensity of the effects carried forward is not visible but they decrease each time and eventually coming to an end.